Celebrating over half a century of shopping at Yalden’s 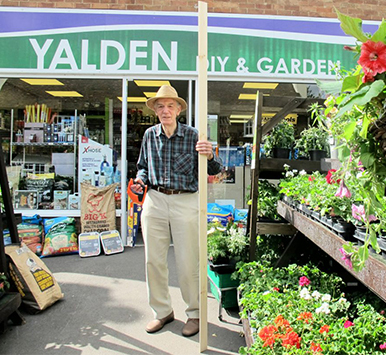 The following article has been written by one of our long-time customers; Dr Alex Weiss:

After half a century, I’m still buying tools and wood from Yalden’s

In the autumn of 1966, I moved into a Regency cottage in Chalfont St Giles with my wife and family. Our cottage was located about two-hundred metres east of Yalden’s DIY shop in Three Households and required a great deal of refurbishment as it was 150 years old. The building did not have a single built-in cupboard!

The ironmonger’s shop was run by Bernard Yalden and he not only supplied me with tools, hardware and timber but he was also happy to give a DIY beginner a lot of practical advice. I was also often helped by his wife, Doris, and also Brenda, another Yalden family member. Although in the nineteen seventies DIY supermarkets sprang up in the larger towns in the locality, they didn’t deliver and our car, an old Volkswagen Beetle, was quite unsuitable for carrying lengths of timber. The result was that Yalden’s got all my trade … and still does. The shop has always been an Aladdin’s cave for DIYers and I have often been amazed at the amount of stock it holds, helped by several expansions.

In the nineteen-eighties, when Bernard retired, his son Bob took over running the shop, with Margaret, his wife adding a range of kitchen ware. This was popular with my wife, Lynda. One day a practical friend of mine berated me for buying large tins of paint at Yalden’s, saying it was much cheaper in a certain DIY supermarket. I checked and found the supermarket was actually rather more expensive, so again I stuck with Yalden’s and also saved the travelling time and cost of driving. I’ve noticed that local builders and decorators also frequent the shop, which now runs a loyalty card system for regular customers.

Over the years, the shop has changed and some things have gone. They no longer have a large tank of paraffin in the back where they would fill your can for the many household paraffin heaters then in use. But they do now carry a wide range of LED light bulbs. Despite the changes, the shop has never lost the friendly and helpful approach of its staff. A few years ago, when Bob and Margaret retired, their son Matt, Bernard’s grandson took over and has ‘computerised’ the stock and the tills. And, if they don’t have an item in stock, they can often find what you want from one of their suppliers on the internet and get it for you in a couple of working days. Matt has also introduced a wonderful selection of plants for the garden, on display outside the shop.

So now you may understand why I’ve been buying from the same family owned shop for over half a century and why I have really enjoyed the experience.